In November 2015, Romanians protested to take down a corrupt national system. Protests were triggered by the fire tragedy at a concert in Bucharest, that killed more than 60 and seriously injured many more. 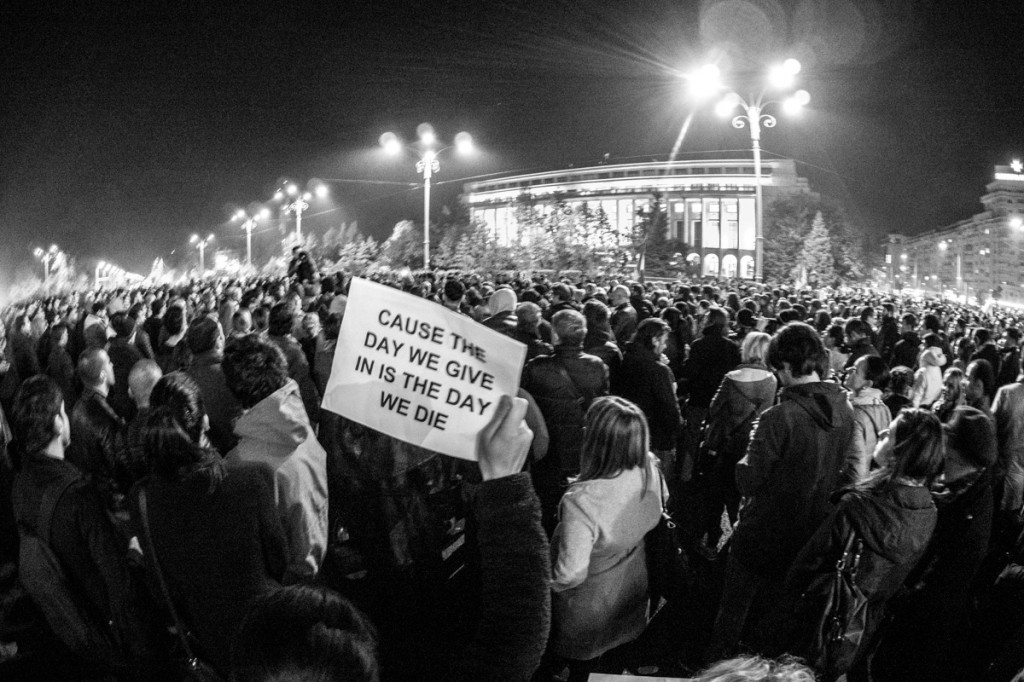 “We’re not numbers, we’re free, we’re so alive
Cause the day we give in is the day we die”

These lyrics are from the opening song “The day we die”, included in the album that was released when a fire broke out and turned a rock concert into a collective tragedy. As a result, tens of thousands of people marched on the streets of Bucharest and other Romanian cities under the rallying cry, “corruption kills”, leading to the resignation of Prime Minister Victor Ponta and his Cabinet. The link between this fire tragedy and political corruption may not be obvious, but an inside view of the Romanian justice and political system will unravel it.

On Friday evening, the 30th of October in Bucharest, the Romanian rock band Goodbye to Gravity held a concert to promote their new album inside an old communist factory which had been turned into the night club Colectiv (the Romanian word for “collective”). Firework sparks ignited the acoustic foam on the walls, sending panicked people stampeding for the single-door exit. 60 people died as a result of burns and chemicals released by the smoke and a dozen others were mutilated and disabled by the fire, and will receive medical attention in hospitals from all over the world in the coming months. Among five band members, only one survived.

The tragedy prompted a wave of solidarity across the country, marked by major donations for the victims, but also anti-corruption protests. Romanians saw the tragedy as directly linked with systemic corruption, the kind that would allow nightclub owners to operate with corrupt inspectors not properly checking their safety conditions.

About 25 000 people marched on the streets of Bucharest and demanded the resignation of officials such as the Prime Minister and the mayor of the district where the Colectiv nightclub was located, as well as an overall accountability of political leaders.

THE PEOPLE HAVE THEIR SAY

Protesters were paying their respects to the fire victims and pointing their anger towards authorities: “Shame on you!”, “We want resignations”, “Assassins!”, “We want healthcare, not secret services! We want hospitals, not cathedrals!”, “Corruption kills”. Angry slogans mixed with quotes of the band’s lyrics became something of a credo. The fire tragedy brought together people from various social groups, who occupied the streets and demanded political accountability.. Elders, hipsters, rockers, corporate workers, blue-collar workers, nationalists and anarchists marched together, united by the tragedy that embodied the result of a rotten system, and making these protests one of the most socially diverse in recent history.

The protests were organized on Facebook, where people marked their solidarity by changing their profile pictures with a black photo of mourning with the phrase, “Corruption kills” on it. It was not the first time social media had acted as a catalyst for people’s anger toward the system. In 2012, protests triggered by austerity measures and organized on social networking contributed to the downfall of the government. In 2013, massive protests that continued for more than a month halted a mining project that had major impacts on the environment. And, in 2014, Facebook contributed to the unexpected election of President Klaus Iohannis, and it seemed as if people were going to protest when they were heading to vote.

In 2015, the protests led to the resignation of Prime Minister, Mr. Victor Ponta, which ended the mandate of all his Cabinet’s Ministers, as well as the resignation of Mr. Cristian Popescu Piedone, Mayor of District 4, where Colectiv club was located. “I don’t want to fight against the people”, Mr. Ponta said when resigning. He was already under trial for money laundering and forgery and had been a central figure among the 2013 protests, when his resignation was demanded as well, but he refused to step down.
“Remember, remember, the third of November”, many Romanians exclaimed, mirroring the motto from the dystopian political thriller “V for Vendetta” to mark their first victory . But people were not satisfied yet, as they believed that the systemic problem of corruption in Romania could not be solved with a couple of resignations. They demanded system change. They wanted their political leaders to acknowledge that they were serious. So they continued to take to the streets, protesting.

CORRUPTION AS A SYMPTOM

“I do not believe the protests were exclusively about corruption, but represented the reaction to the trap that holds us prisoners… Corruption is a symptom and the fight against it is not merely by principle, but for better public services, for respecting citizens.”
– Radu Nicolae, Romanian professor and anti-corruption expert.

Recent history explains why the fire tragedy prompted such a chain reaction and enraged tens of thousands of people, to the point that they quit their daily activities to march on the streets. The transition period following the communist downfall in 1989 allowed corrupt politicians and barons to erect and hijack the potential of a free country. For many years, they went on without being bothered, with seemingly passive authorities, within a passive democracy. The civic involvement of people was brought down to the act of voting, usually marked by a low turnover. Things started to change after 2005, when, under international pressures for reforming the judicial system, the government rebranded and strengthened a specialized anti-corruption agency formed in 2002 (DNA) that eventually led to the conviction of major politicians and tycoons – such as a former Prime Minister and influent mass media owners. According to the Direcţia Naţională Anticorupţie (DNA report), in 2014 alone, 24 mayors were convicted, along with one former prime minister, 5 members of Parliament, 7 judges and 13 prosecutors, with a total of over 1000 indictments.

Nevertheless, Romania continues to be among the most corrupt European countries, according to the perception index of Transparency International. Last year’s trials and convictions still makes it a prominent topic on the public agenda. Sometimes, it triggers social disobedience movements, such as the recent protests. Critical voices say such unrest only creates chaos and does not offer solutions.

THE EFFICIENCY OF PROTESTING

Nicolae argues that the last protest, triggered by the Colectiv fire tragedy, in reality encapsulated the disappointment of a system that has failed its citizens. “Colectiv [tragedy] has showed that no matter how much we would try to isolate ourselves and not get civically involved, the system catches up with us and harms us”, he has said, “and I believe that the protests were a burst against all the abuses, arrogance and corruption accumulated after the [2013] Rosia Montana protests”. To illustrate his point, he offers examples on scandals of plagiarism, secret services protecting politicians, public services that fail to serve the public interest, convicted politicians who refuse to step down from their positions, and so on. There are many issues to tackle and, as an anti-corruption expert, he is not optimistic about the future of Romanian society, fearing that capable specialists will not be willing to step up as leaders, leaving the unqualified to grasp political power.

There are many critical voices in Romania who share the idea that such unrest as the recent protests only generate chaos and do not offer real solutions.

On the other hand, the outcomes of the Romanian protests appear to weigh more and more in the political decisions and in the self-confidence of the regular citizen. They increasingly turn politicians into becoming accountable for their actions. Manifestations that followed the tragic events in the nightclub led to the fall of the government and elected officials, and allowed the formation of a technocrat government. Public debates on citizen demands were conducted by utilising technology, with online consultations and votes on user-friendly platforms, for example. Several grass-roots initiatives have been stimulated, too, and have the potential to become agents of social change.

“Inițiativa România” (Romania initiative) is one of such initiatives. A civic platform created during the Colectiv protests, it aims to unite Romanian citizens and members of civil society to generate political change. It now has over 600 members, coordinated by a handful of professionals with varying backgrounds. Their first major project, currently underway, is to build a list of respected candidates for upcoming local elections for mayors and city council members in Bucharest, with the support and approval of its members and the general public.

In addition, older organisations have benefited in a surge of popularity as a result of the broad awakening of civic interest. One of the most active non-governmental organisations, Funky Citizens, which focuses on anti-corruption, saw an overwhelming increase in online traffic and received masses of messages from Romanian citizens.

Unfortunately, these initiatives have not seemed to fulfil expectations in the same way that the demanded upheaval of the political status quo did. Shortly after the wave of optimism brought about by the resignation of the Government and its replacement by a technocratic group, disappointment began to simmer – voiced particularly over social media. The budget proposed by the new government would perpetuate inequalities, shifted subsidies for the environment over to defence, and its framework was largely perceived as not being transparent enough in the wake of what had happened. To top it off, public consultations regarding the new budget were considered far too short given the length of the text – three working days for a text thousands of pages long. Feedback was even scheduled after its approval, removing the possibility for public input.

Funky Citizens, who meticulously followed this process, announced its intention to sue the government. The manner in which the government chose to conduct the budgetary changes rendered some of civil society efforts as futile and appeared to widen the gap between politicians and citizens. For some, it was a sign that things would never change in the Romanian political system. For others, it was a stepping stone: a lost battle, one of many that will only increase public awareness and will one day help to bring about the kind of mobilised movement that Romanian society needs.

Radu Nicolae, Romanian professor and anti-corruption expert, when asked if he feels that the Romanian ‘transition generation’ (born in the ‘80s and ‘90s’) is coming of age and delivering a new relationship to the state, or if the people who went to protest in the streets are rebels without a cause, replied with, “From my perspective, this generation might be able to redefine the relationship between the state, institutions and society in the future – but I do not believe that there is enough solidarity and dialogue yet.”.

The systemic changes demanded on the streets crowded with protesters appear to be far from being accomplished, but considerable steps have been made by civil society and Romanian citizens. The fight goes on.